Here is a few of my favourite pictures of the lads. There are so many to choose from and a picture can capture them in a variety of moods, even now there are 'undiscovered' and 'rare' photos coming out of lofts and cupboards all the time.

To me the best photos are the candid ones  - there is a book i am watching on ebay called the Beatles Unseen, showing spontaneous and revealing images of them. The posed and contrived  'official' photo shoots have their place and are of course excllent quality, but they lack the down to earthness of the bands attitude, especially of the early days.

Any way have a look and enjoy.. 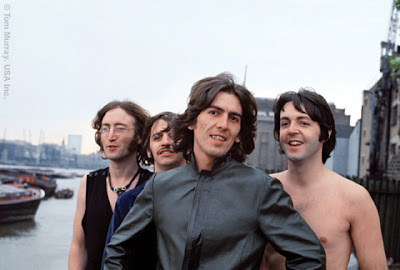 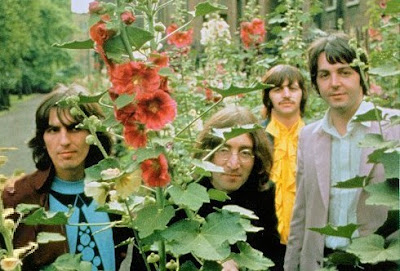 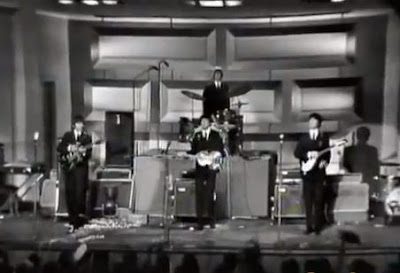 Came across this Youtube post featuring a recently 'restored' live Beatles concert. The introduction explains that the full concert was recorded during the visit to Australia in 1964, but it was cut and hacked to feature only selected songs for the final version. Its a good example of a full early concert including some rather garish warm up acts, some of the video footage has been lost and is replaced by similiar images, but the full soundtrack remains. After seeing  the 'Bootlegs' last week  i am reviewing the live concerts to see the quality of the live music and their stagecraft. 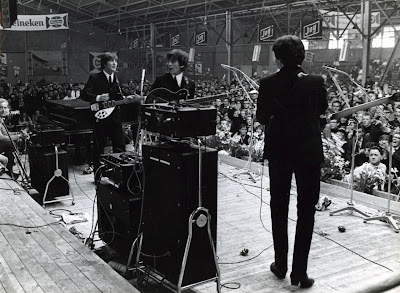 There has in recent years been some criticism of the live sound of the band,  - as the beatle madness got out of control they lost faith in the touring and musical credibility, it was one of the reasons why they eventually gave up live touring. It is also interesting as it shows Lennons attitude to the audience, not very politically correct now and probably not as he intended, but read into it what you will. But despite the poor quality of the recording and early video quality it actually proves how tight they were as a rock band, both vocally and musically. See for your self, they play the last forty minutes or so, the warm up acts are as expected about 5 years behind the Beatles in their act and look....

http://www.youtube.com/watch?v=kiEDsJz9yQ8
...whilst i was on the youtube site i also found this interview with Paul McCartney recorded in 1990.
Although there are loads of interviews with him and his interpretation of the break-up of the band, this one seem rather openhearted, and very personal, never seen it before and worth a look, the ending is poignant because it is 'off camera' and has Linda being very straight forward.

http://www.youtube.com/watch?v=aboVVvLgelw
Posted by Chris Rock at 22:34 No comments: 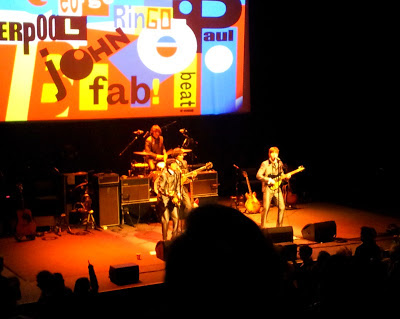 Well what can I say? Absolutely superb! A three hour show for the paultry fee of £26.00, and the musical and acoustic reditions of the songs and in-jokes were just spot on. I must admit I was rather nervous of seeing them again, but within the first song I actually began to relax and even stood and clapped with the audience on occasion. I think my nervousness was due to my being somewhat more mature than the lastime, and I think I expected them to let me down with the quality of the mimicry and the look of the show, but I was proved wrong and I urge anyone who enjoys the Beatles music to go and see them, it is the closest you are going to get to experience a 'Beatles' live music concert. 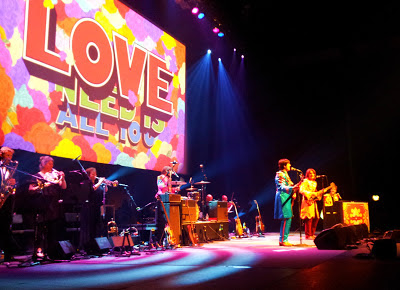 They employed very clever backgound visual graphics and movies to help with the bedding of the different fashions and styles which were everchanging throughout the bands lifespan...it wasn't a cheap and tacky way of making money from nostalgia, but a real and sometimes quite emotional tribute to the Beatles and their incredible musical journey; they even had McCartney left handed now which was an original criticism of mine on an earlier post. The addition of the string and brass quintet did not distract from the songs and very much showed that had the Beatles really wanted to, they still could have performed their 'recorded studio' songs to a live audience.

Hearing the 'live' versions of the songs i know so well you really begin to appreciate the craftsmanship and power of the tunes and the instruments too. I can see as a stage band how they managed to capture the excitement of the times, and also emphasise the important roles of both George as lead guitarist and Ringo as the drummer/beat keeper.

I have to thank the Bootlegs for giving me and the Society a shout out, the email did get to them after all.... thank you Adam, Steve, Andre and Hugo for great night!

Heres a link to some pictures and some live footage i took on my phone camera, some are a bit dodgy in quality but it will give you some idea of what to expect when you go and see them live... and you must!

http://www.youtube.com/watch?v=DcA4tHHBbsY
Posted by Chris Rock at 21:05 No comments:

Here is the text from the York Mix Beatles 50th Anniversary article that appeared. It is written by Van Wilson who wrote a book in 2002 about the history of Yorks pop music scene.

''It is exactly 50 years since the Beatles first played in York. That turned out to be a low-key appearance but their later concerts prompted a severe outbreak of Beatlemania. On February 27, 1963 Helen Shapiro was to top the bill at a package show at the Rialto on Fishergate, York – where Mecca Bingo is today – with the Beatles as second billing. Helen contracted flu and did not appear so singer Danny Williams took her place. The Beatles only rated seven lines in a one-page review.

The Beatles returned on March 13. Chris Montez topped the bill, followed by the Beatles then Tommy Roe. John Lennon was ill and could not play so the group performed for the only time in their career as a trio. After the show George Harrison told Stacey Brewer of the Yorkshire Evening Press, that the Beatles’ next single, From Me To You, had been written by them in the coach as they travelled from York to Shrewsbury following the February concert.


On May 29 they came back again with Roy Orbison topping the bill and tickets were sold out two weeks before the concert. This time the Beatles were headline news. In only two months they had shot to fame and From Me To You, their first number one hit, remained in the charts for 21 weeks.
By their fourth and final appearance in York, on November 27, they were topping the bill. Arriving early in York in their Austin Princess limousine, they dropped in at the York Motel on Tadcaster Road for a meal. I lived in that area and remember a friend of my brother’s dashing round to our house to tell my elder brother Mike that he’d heard the Beatles were at the motel.
They ran down to the main road to try to catch a glimpse. I wanted to go too but was not allowed! Half an hour later he came back gloating because they had seen a car go by the Knavesmire with the Beatles inside. There was no one else around so they knew that when they waved madly, they got a personal wave in return, which was more than the crowd at the Rialto got, as the Beatles were rush in through the front door to avoid all the fans at the back door.
Before the concert the police had to work out a special “Beatle plan” and arrange traffic diversions. As well as 100 policemen, another 40 special constables were drafted in on “Beatle duty” for the occasion. Some young people had started queuing at lunchtime in the hopes of seeing their heroes. The Rialto management had been sent hundreds of requests for autographs, and even a dress which the owner wanted the Beatles to sign so that she could raffle it for charity.
There were 1,800 fans inside the auditorium and another 400 outside jammed behind crush barriers chanting, “We want Paul, George, John, Ringo” throughout the concert. In fact they stood for five hours in the cold. Stacey Brewer’s review in the Yorkshire Evening Press said that “their final, frenzied frantic version of Twist And Shout threatened to lift the roof off the Mecca Casino”.
It seems more information is coming to light regards where the lads stayed when they visited York on their last gig. I cant find any old images of the York Motel in the 60's on the web so if anyone has info it would be appreciated. The other interesting facts are the cars the Beatles used, Van Wilson mentions an Austin Princess Limo, other sources say they had a bottle-green Zephyr Six, Reg 2074 KD to use as well. See pictures below:

I came across this picture below purely by chance; apparently its an Ex-Beatle Limo. Found in poor condition in 1999 in Somerset, its a Daimler DS42(5?)0. There is some very good images in the Beatles Anthology book of various vans, cars etc that the Beatles used in the early days, but I will need to scan them in first... This Beatle cars subject is a website in its own right!!!! I will add a new page to cover this fascinating aspect.
Posted by Chris Rock at 20:05 1 comment:

Ok... Tomorrow the York Evening Press are running an article on myself and the Appreciation Society. Its basically the same text i sent to YorkMix, but with some new pix done by the press themselves. It will be the fastest and easiest way to get to the York masses about what the society is about.

I will post a copy of the article after its publication. Thanks to Steve Lewis at the Press for his enthusiasm and his generousity and hopefully this will open the door to a flood of people wanting to get involved.

Thru Steve i have a load of new articles and information to post here. I will post it as i get round to it. This time next week myself and Gary will be in our seats waiting for the show to begin..Bootleg Beatles....i did email them regards to giving the society a shout out at the show, but so far i have had no response. might get some leaflets knocked up and hand out at the Barbican.

PS here's the link to the York Press article that appeared yesterday: