When the Beatles came to York

On all 4 occassions they played the Rialto Theatre on Fishergate, now long gone and replaced by a new bingo hall. I still need to research if they stayed in a hotel or if they made any public appearances during these visits. Stay tuned.....Below is a collection of images after trawling the internet for a week. Saddest are the pictures of the Rialto before it was demolished in 2003, (for more images copy and paste this link : http://www.28dayslater.co.uk/forums/theatres-cinemas/25113-former-rialto-cinema-york-pics-april-2003-a.html )

Here is an interesting link to a web article about the Beatles playing the Globe theatre in Stockton-on-Tees, on 22nd Nov 1963.

It's interesting because it actually has some pictures of the audience whilst the band were playing AND even a rare photo of the lads themselves on stage during the performance. I would imagine the scenes at York's Rialto theatre would be almost the same...have a look!

*********
OK as promised here is some stories from some of the people who have seen and remember the Beatles coming to York, these have been re-posted from articles sent by Steve at the Evening Press and from some information supplied from the YorkMix website.

'' As the entertainment correspondent for the Evening Press and local DJ, Stacey Brewer was in the thick of the swinging Sixties. When The Beatles first played the Rialto, on March 13, 1963, they were just on the cusp of super-stardom. Back then, they were bottom of the bill, supporting two American singers, Chris Montez, who had a hit with Let's Dance, and Tommy Roe. But the four Liverpudlians were already fab. Teenagers who had paid between 4s 6d and 8s 6d to attend one of the two evening shows certainly got their money's worth. Mop-tops bouncing in the spotlight, The Beatles treated the audience to songs that would become pop classics - Love Me Do and Please, Please Me. "I liked the music - we all did," said Stacey. "And they were great personalities. Paul McCartney was the heartthrob of the group." By the time they returned to York, John, Paul, George and Ringo were huge household names. But they couldn't escape the contract that brought them back to the city - this time at the top of the bill.

**********
Received this in my request for local memorabilia from John Norman of York.


'' Hi Chris.
My wife saw the Beatles (but did not hear them for the noise) on their last date in Nov 63 and the following day heard that they were to leave the Royal York hotel to travel onto the next show.
She hot footed it down there and found them in what is known as the tea square at the rear of the hotel and inside a Ford Zephyr six were the Beatles along with Maureen Cox and Cynthia Lennon. The girls with her from the old York Tech managed to get three autographs but my wife banged on the drivers door window and Paul McCartney wound down the window and signed for her, so she had all four. 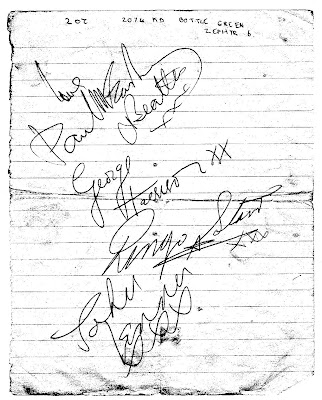 We still have the Autographs on a piece of old ruled A4 note paper with the cars reg written down on it. (see image). You can make out the car reg was 2074 KD bottle green zephyr six.
Hope this is of interest.''
John Norman
Thanks John for this. It's a great piece of local information and nostalgia along with a real piece of Beatles memorabilia. More like this please!!!

Came across these NEW and UNSEEN pictures of the lads actually on one of their visits to the Rialto in 1963. The York Press ran a couple of articles on them after the 50th anniversary articles so I reproduce them here with thanks to the Press.


Fab memories of The Beatles concert at York’s Rialto

THIS picture shows the moments before a legendary York performance by The Beatles. Taken shortly before their performance at York’s Rialto concert hall in February 1963, a fresh-faced Paul McCartney and Ringo Starr are seen alongside co-manager of the Rialto John Hattersley-Colson in the never-before published photograph.

The Beatles were just beginning to create the buzz which would later turn into full-blown Beatlemania and took to the stage of the Rialto in Fishergate to a rapturous reception. Mr Hattersley-Colson, who turned 80 yesterday, was 29 at the time and remembers the band as being friendly and polite. He recalls they arrived by a big Austin Princess car, and stopped for a drink at the Edinburgh Arms.

He said: “They were nice young lads, there were no airs and graces with them. They were ordinary Lancashire lads like me. The show was fantastic, it went very well indeed. People who went never forgot it. When they became really famous I thought ‘I had a mug of tea with those lads and a laugh and a joke and a giggle with them’.”

The night saw fans disappointed when Helen Shapiro cancelled her performance due to flu. The Evening Press from February 28, however, told how the Fab Four went down a storm with the crowd.

Our reviewer at the time wrote: “Screams of delight greeted The Beatles – a Liverpool quartet who obliged with the songs they wrote themselves and which have taken them into the Hit Parade – Love Me Do and Please Please Me.”

The venue had previously been owned by Jack Prendergast, John Barry’s father, and was later sold to Mecca bingo.

Dealer tells of steady rise in value of Beatles memorabilia 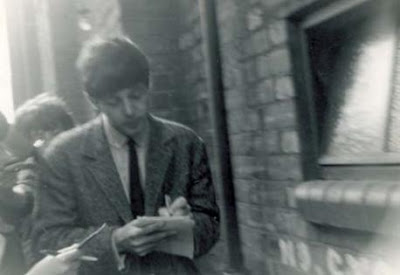 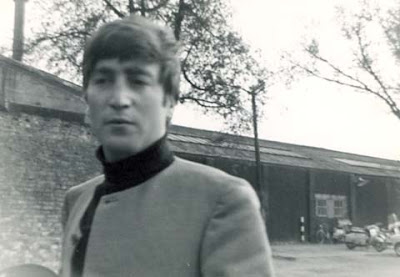 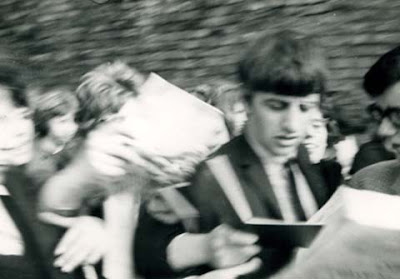 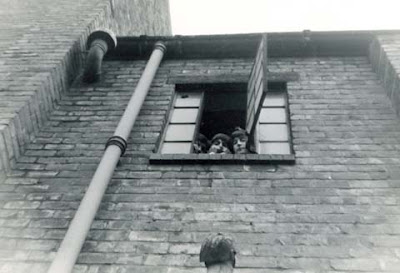 A YOUTHFUL Paul McCartney gives a York fan his autograph. John Lennon stops for a chat with another fan. The Beatles together lean and wave out of an upstairs window at the Rialto Theatre. These previously unpublished images from one of the band’s visits to York in 1963 have been released to The Press by a leading dealer in Beatles and other rock’n’roll memorabilia, who has also revealed just how much such items can now be worth.

Jason Cornthwaite, of Tracks Ltd in Lancashire, contacted the newspaper after we reported the teenage reminiscences of Gill Thompson, who met the Fab Four and other stars when they stayed at her then home, the Edinburgh Arms, following concerts at the nearby Rialto. She had an autograph book full of the signatures of world-famous musicians from the 1960s. Mr Cornthwaite said he had bought the pictures seen here from a female York fan who had taken them during one of the 1963 visits.

He said all the bands and artists who visited the city left behind a plethora of superb mementos. Most of this material had risen steadily in value over the last 20 years, with a significant increase in the last five years – in particular with The Beatles.

He said: “Although the rise doesn’t apply to all types of Beatles items, there has been a substantial increase in the value of specific types of Fab Four ephemera, most notably signatures, concert posters, some novelty items and certain albums. Most of the items in these categories have doubled in value in the past five years. A Beatles concert poster from York in decent condition could now bring £4,000 to £5,000, compared with £2,000 five years ago.”

He invited members of the York public with Beatles and other memorabilia – such as concert posters, flyers, programs, tickets, signatures, magazines, personal possessions, negatives and lyrics – to contact Tracks for a free valuation.

So it just show that there is still memorabilia to be found out there, I bet there are more to come out of the woodwork just like the above as word spreads and of course prices go up... 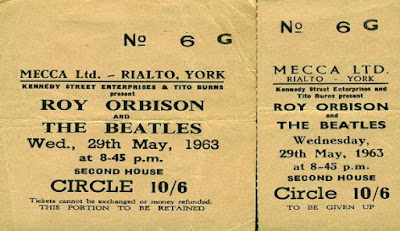 Above is a concert ticket from the 29 May 1963 show at the Rialto, Peter Walker contacted me and sent me the image. He sent me the following info about himself:

"Chris I do not mind at all you putting the ticket and my name on the website. I was born in York but I left in 1969 to move to Canada. Here is an old picture of me if you want to use it. A modern picture of me nobody would know anyway. I would be very surprised if anyone recognized me.

I bought the ticket for ten and six [about 55p]. I was there! Best seats in the house. John Lennon swore .. saying f*** off over and over. I went to see Roy Orbison who sang his hits like 'Only The Lonely'.

I do like history and the more research and facts that become clearer is for the better. I was a member of the Royal Observer Corps and I don't think all the history has been printed yet about them."

Chris Rock
York, Yorkshire, United Kingdom
Born in Middlesbrough, qualified graphic artist/illustrator, 20 years in design and advertising, love my Beatles and history and art. Work in the Museums, Heritage and Tourism industries. Lived in Fife in Scotland for 4 years but now back in Gods County. Self-published my first history book on the Battle of Stamford Bridge 1066. Am also co-founder and ex-Chairman of the recently formed Battle of Stamford Bridge Heritage Society. Current chair of the Yorkshire region of the Battlefields Trust.