By the mid-sixties the Beatles had made plenty of appearances both on stage and in the movies, as well as various 'special' appointments, such as Buckingham Palace to collect their well deserved but rather surprising MBE's. However during my browsing of the internet I hadn't realised their impact on the (then) rather juvenile comic market of not only Britain, but also America.

Comic books were an important part of my childhood and I assume the lives of other children born in the sixties. This was well before any kind of liberal commercialism of the 5 to 12 year old. Comics were cheap, easy to get, disposable or swappable, and they were really the only visual, creative, and imaginative stories fertilising our young minds until the invention of the games console and then the internet.

Be it Corgi the Cat, Biffo the Bear, General Jumbo for the boys, or the Bunty, Judy and Tinkle for the girls it was all we had. Sixties TV was limited to two, then three channels, in black and white, with a poor children's programme line up; even now 'Andy Pandy' or 'Watch with Mother' feels somehow 'subversive'. The comics however could send our little minds in to overdrive. Obviously being a boy all I wanted to read about was tales of either Robots and Invading Aliens, WW2 heroes or naughty characters trying to outwit their teacher, and end up with a pocket full of pies or sausages...oh they were simple times!

What I wasn't aware of until I found them on the web, was the way the Beatles found themselves (or simplified two-dimensional characterisations of themselves) as romantic idols for starry-eyed girls. Girls wishing for their perfect man to come and be a romancing hero, and whisk them away from the drudgery of a 12 year old's hard, hard life.
Of course it was just the publishing market milking the pockets and young minds, and their dreams of love. But it probably sold plenty of copies and I should imagine the Beatles themselves had no control of the use of both their personalities and their perceived image. How could it be policed? The Beatles 'unofficial' franchise was a virtual open opportunity to get rich quick.
However it didn't stop there. After finding these 'girl' comics, I wondered if the Beatles were incorporated somehow in to more 'male' orientated comics...and hey presto! the influence of the band appears with other superhero's such as Batman and Superman. Although they don't seem to make a direct appearance in the comics, they are parodied and work their way into the writers sub-consciousness. Now that is making comic book big time!!
Enough of the light-hearted comics. I thought that if the Beatles had been depicted in the rather childish comics and the wildly 'out of this world' comics, then surely there must have been some attempt at an original and authentic version of the Beatles story. The TV Times special Beatles publication from 1982 seems to be just that. Using the skills of a very good comic book artist and the period photos from the time, they have combined to produce probably the best version of the lads rise to stardom in a readable comic-book format. I aim to try and get a copy of this quite rare version soon, and when I do I will give you a better review of it.
The Look-In magazine which accompanied many of the big ITV series in the 70's and 80's did sometimes produce Beatle related editions, some of which I have shown below. Don't forget in the 70's as an up and coming Beatle fan I still had no direct access to much of the Beatle footage and TV programmes made from the sixties onwards. Now you can virtually find any interview or show by a click of a You-Tube link. There was no Satellite/Cable TV, no VHS/DVD material to buy or collect, and other than the Beatle Monthly Fanzine (which was just a rehashing the original 60's copies) no regular reading material. So a glimpse of the lads on a TV show, or on a repeated documentary was really a very rare event, and I still remember my spine tingling when any footage was shown. Now of course the fans are just spoilt rotten!! 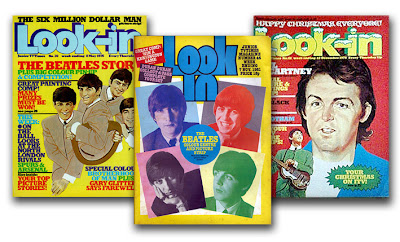 Marvel comics got back on the bandwagon with their version of the 'Fab Four' story. Unfortunately, it falls short in terms of accuracy and quality. Stan Lee should stick to fantasy supermen rather than real heroes, you can't find fault with fantasy because there are no limits...

A more serious attempt at depicting the Beatles story was by the 'Rock & Roll' Beatles Experience, a series of 8 books, some of which are shown below. These are quite still available on Ebay mainly from US suppliers, but some of the cover artwork looks rather dubious, so I should imagine the inner artwork follows suit. Part eight shows McCartney in a zombie-like state, obviously referring to the 'Paul is dead' myth. 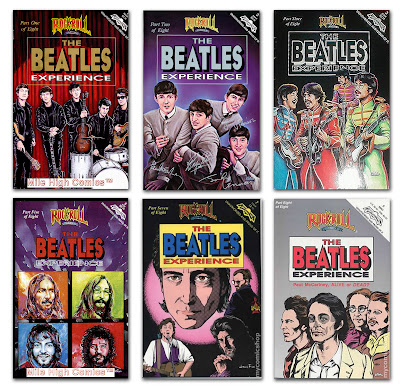 Below is a set of 'Personality Comics' covers. This US publisher again tries to give the credence of an adult themed publication, each edition focusing on an individual Beatle, I haven't found George's one yet but I am sure it must be out there somewhere!

Another 3 comics below are again of doubtful quality and accuracy judging by their covers. Whether it's a flippent version with little research, or just a glossing over of the well diluted facts, - my guess is money was the motive here. 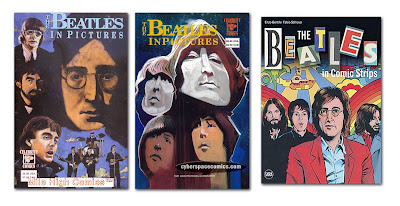 The next three are a rather amusing set. The first is a version of the Sgt. Pepper cover with again zombie-like Beatles, why it has been chosen I have no idea as the storyline seems to take place in Death Valley. The middle one looks like a 'MAD' type of caricature of the Beatles, complete with rather over stylised 'Bad Acid Trip' illustrations, perhaps the artist has had a reality check in the 70's after the hedonism of the sixties....AND just what is this pre-occupation with the Beatles and death (or the living dead)??

Well, we had to get there eventually didn't we. The really trashy ones are here. Below are some miscellaneous comics that really are scraping the bottom of the Beatles barrel. I can only but guess what's actually going on inside, but from the covers it is wide open to interpretation. The first one, the 'Graphic Biography' makes me shudder, I don't think the artist has even had a photo of the Beatles from which to base his illustration upon, it is absolutely terrible. No doubt there are many more out there and if i find them they will make their appearance here. If you know of any please get in touch and let me know. 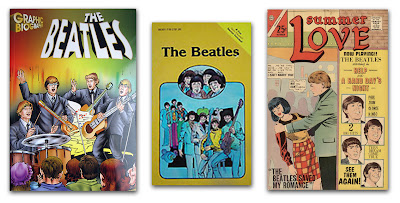 April 15th: Just found the complete set of hi-quality scans of the 'Beatles Story' comic produced by Marvel in 1978 as a special.

During the 1970s Marvel became the top-selling comic book company. This edition was written by David Anthony Kraft with art by George Perez and Klaus Janson (with a wrap-around cover by Tom Palmer). The Marvel Super Special version of the Beatles Story was four years ahead of the Look-In comic, but its style is firmly stuck in the 1960's, reminiscent of the early Hulk and Fantastic Four comics.

The website author has this to say about the production:

''This 'unauthorized biography' did a fine job of organizing the highlights of the Beatles tumultuous history, capturing the look, feel, and mood of each Beatles 'era'. You could tell this was a labor of love for Kraft, a former rock journalist who was a firm believer in the rock and roll/comicbook connection. George Perez was a natural choice for drawing the Fab Four as he had made a name for himself as a 'group artist', having for a period of time drawn the Avengers, Fantastic Four, and the Inhumans simultaneously. On top of that, his ability to draw realistic likenesses was rarely given such free reign.''

Hmm, not my opinion I'm afraid. The quality of drawing may have been sufficient for the likes of superheroes, characters who were pure fiction, but when it came to real people, portrait drawing in various angles and lighting has got to be spot on, otherwise it looks clumsy and poorly researched. And this publication is unfortunately that. Although the storyline is contrived, it moves along at a swift pace, the four Beatles are in fact crow-barred into comic book cliches, unoticible in a superhero storyline, but embarrassenly obvious when trying to portray real life situations and events... Anyway make your own mind up, below are some sample pages for you to see,

I actually got hold of he Look-In comic book and it was more than I expected. A really very fine piece of artwork and the storyline is well directed and easy to read, I urge you to try and obtain a copy yourself - if you can! 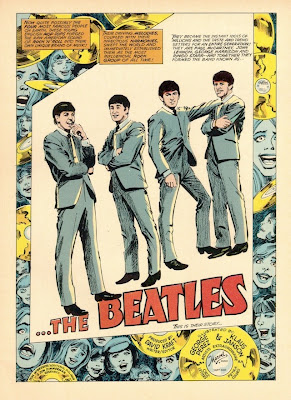 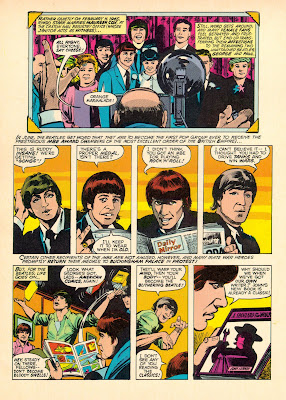 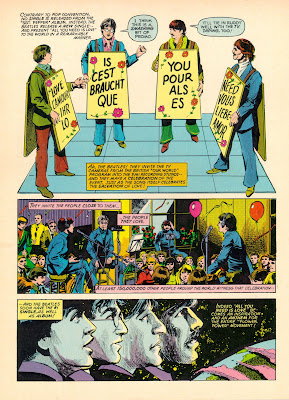 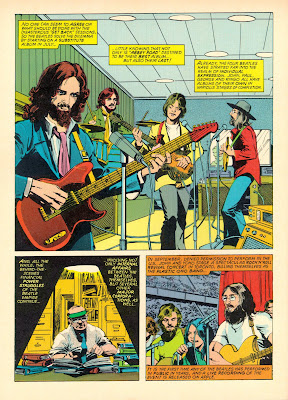